A Letter to Trans Non-Binary People from Rhi Kemp-Davies, a non-binary sex therapist

I will be using the term ‘non-binary’ in this letter with the acknowledgement that it is a great umbrella term for many different gender identities and expressions but isn’t a catch-all, either, for all gender identities outside of the binary. 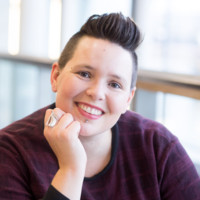